Morbid catastrophe brings out lots of questions about being a Christian, and there’s been a lot of it lately: bombings around the world, deadly hurricanes, campus and public shootings, and the Las Vegas massacre. After incomprehensible tragedy comes into our lives like this, we’re left with a big question: If God can stop it, why doesn’t he?
That’s the question my fiancé posed to me as we mulled over the worldly sufferings that have been seemingly non-stop the past year. I didn’t have a good answer for her, and that bothered me.
As Christians, answering big questions like this is troubling. It seems to contradict our faith at times, make us question if what we believe is even real, if we really need to answer it or let it slide. As difficult as it is, we need to try.

Ignoring the big questions of our faith damages our ownership and gives reason for unbelievers to stay unbelievers.

I started researching this big question, and only found myself dizzy at the opinions and justifications being offered from multiple perspectives. 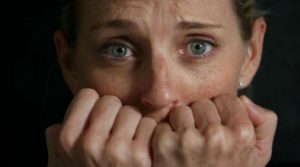 Kai Nielsen, an atheist philosopher and professor, makes a point in his Ethics Without Religion that “neither the religious man nor the secularist can explain, that is justify, such suffering and find some overall “scheme of life” in which it has some place, but only the religious man needs to do so.”
This statement sticks out to me as a Christian. People of faith have a need to find a reason for the suffering, but people who don’t believe see it as another instance where grit and courage is to be used.

Finding a reason why we’re suffering is exhausting, especially when God and our Christian answers don’t make sense.

I can’t explain why God will display a miracle in one moment and keep it from another,
and I can’t explain why one person survives a massacre and another dies.
God and fate is a mystery, and if any of us could understand these, God wouldn’t be God.
That’s a “churchy” answer I tell my students, but it holds truth.
What I can begin to explain in the Christian thought is how moral evil exists because of free will. And if we have the right to choose good or evil, evil things are going to happen to the good people. That’s why bombings, shootings, and terrible human decisions of terror happen.
Earthquakes, hurricanes, and other natural disasters taking lives seems harder to explain. That’s not a moral evil, it’s nature groaning. Perhaps it’s because we live in an inherently evil world, or we deserve the sting of death, or because God allowed it or willed it. Even so, this still doesn’t make tragedy easy to comprehend.

What I do understand is how evil influences people’s faith–and not always in a good way.

Sometimes, because God doesn’t “show up” in one moment, we don’t believe he’ll show up in another.
And when we can’t comprehend why God does or doesn’t do something for our good, I think we find a small inkling in ourselves that doesn’t trust him as much as before.
It’s moments of suffering and evil and terror that make or break a faith. Take the Las Vegas massacre for example–one agnostic was reported coming to faith because of the surviving the shooting. But I have no doubt there are Christians who died and their family members are asking how a God they believe in would allow such a catastrophe to occur–perhaps they even let go of their faith because of it.

It’s human to struggle with “why”.

It’s all over the Bible too. It’s a part of our human existence to not understand why and question the qualities of God. The Apostle Paul wrestled with why God allowed suffering in his own body, Jesus asked why God had forgotten him on the cross, Elijah complained of his daunting situation and asked to die–we will always wonder why or how evil is affecting our lives.
Everyone, Christians and non-Christians, will ask why evil has so much power and brings so much pain in this world.
Even though our faith can seem weak or confusing or cowardly in times of peril, it offers hope, it offers promise, it offers a future without terror.
Be the hope in someone’s life today. Be the light in a world of darkness. Be the reason someone chooses love over hate.
Share this:

One thought on “As Christians, How Do We Justify the Evil in This World?”